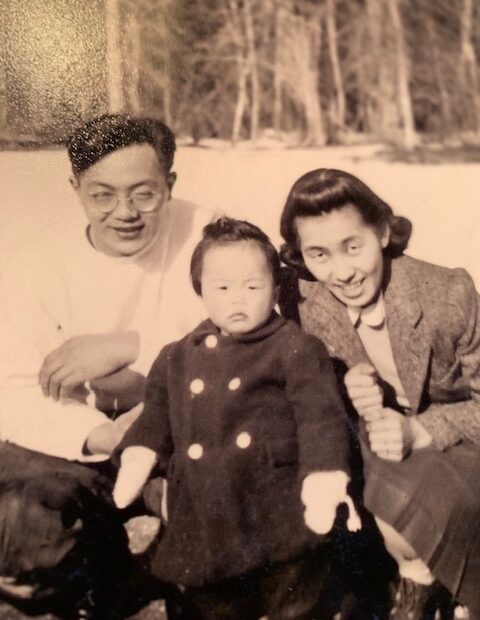 In 1941 my BC born mother was living with her family in Vancouver’s Kitsilano neighbourhood.  She was 21, and happily going to a movie downtown with two friends.  As they were getting off the bus, they were met by white middle-aged women shouting remarks such as “Japs, Japs!” “Go back to where you belong!” “We don’t want you here!”

Suddenly one of the women spat at my mother.  My mother said she stood there…stunned…with the gob of spit running down her cheek.  Her first thoughts were “there really are people who hate us.”

Fast forward 79 years to May 1, 2020…I was standing in the produce section of a mid-sized grocery store, peacefully pondering which vegetables to buy.  It was 07:30 a.m. “senior’s shopping hour”.  Suddenly I became aware of a woman shouting.  I turned and realized a white woman was standing right beside me, stabbing her finger in my face and shouting “where is your mask?” “you, of all people should know better! “it’s you people who brought the disease here!” “you’re killers!” “go back to where you belong!”  She fled.  I stood stunned.

I quickly walked around the store looking for her, all the while noticing very few people wearing masks, plus the fact that I was the only Asian-looking-person in the store.  I wanted to find her to point out all the people not wearing masks – including the store staff.  What else would I say/do?  I was fine until checking out and the cashier said “have a good day”.  That’s when tears started streaming down my face.  I surprised myself. I like to think I’m strong. Why was I crying?

Reflection time:  I kept asking myself why this incident stung me so badly.  It hurt.  During my career I had people unhappy with me, angry, but those were work related and had to do with what I did/didn’t do/couldn’t do/wouldn’t do.  This time, the woman’s anger was based strictly on how I looked.  Assumptions.  White vs Asian.  Us vs them. Absolute racism.

I reported it to the police and was told that they wouldn’t even take a report because this was a non-chargeable offence.  I told family, friends and was sometimes told to go to social media and newspapers.  I didn’t.

Why not?  I wanted to do more than be “another incident”.  All too often people hear about incidents such as mine – or worse.  They shake their heads, declare it as “awful, terrible” then forget it.

I chose/choose to tell people myself in order to actually discuss not only the incident, but the racism behind it.  My hope is that the personal touch will have a longer lasting impact than being another minor news story.

Vivian Wakabayashi Rygnestad is a retired school principal and lives in Richmond B.C.